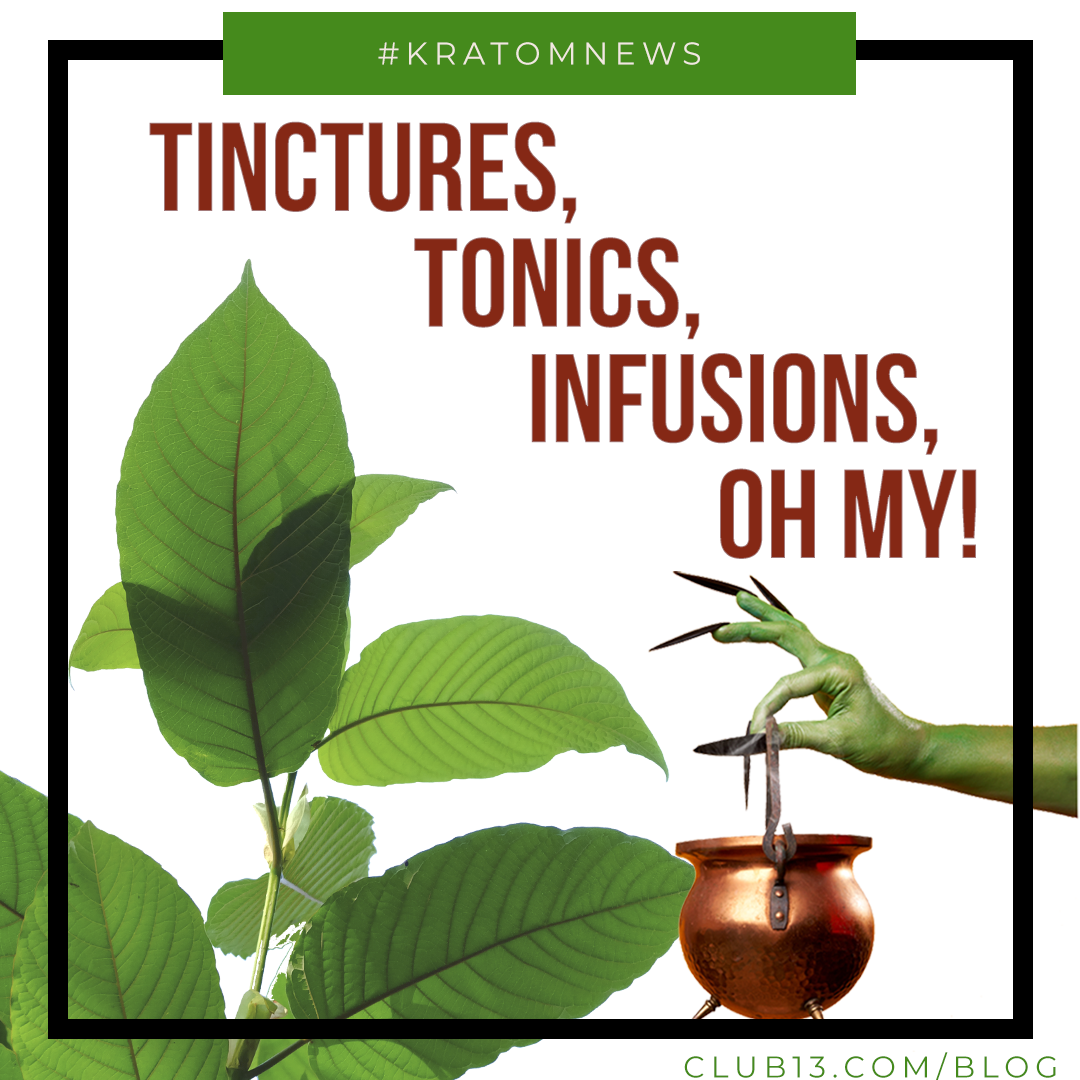 In celebration of this most witchy of holidays, I’d like to look back at our botanical history, which predates modern medicine. People’s desire for wellness is nothing new. The power of plants, such as Cannabis, Hemp, and Kratom, has served humankind since the dawn of time. Our ancestors were brewing a combination of Tincture, Tonics, and Infusions to unwind, heal everyday wounds, and cure diseases for centuries. While some of what they believed was a lot of hocus pocus, they didn’t have the science and technology to back their potions up. Today, we have all the luxuries at our disposal. We’ve honed our craft over the centuries and can now reap the benefits of what mother nature has to offer.

Since the beginning, human experimentation with plants has led us to learn how they can help us heal, inside and out. For as long as people have existed, we have used plants for medicine and wellness.  Archeological evidence dating as early as 60,000 years ago have found remains of medicinal plants, such as poppies, ephedra, and Cannabis.

In many cultures, knowledge of a plant’s curative properties came through Shamanism, a kind of spirit medicine still practiced in many parts of the world. These botanical witch-doctors communicated with specific plants. They were also responsible for collecting, growing, and blending plants in early Tinctures, Tonics, and Infusions.

As people’s knowledge of plants grew, herbalists began to catalog their knowledge of medicinal plants. One of the oldest and most extensive written records on plants is called the Charaka Samhita, dated around 700 BC, in India. This document kept a history of more than 300 medicinal plants, their uses, and where to find them.

Today, we might not believe that plants have a “spirit,” charging them full of medicinal properties. We now understand that plants are made up of compounds, giving them magical-like abilities to heal.

Mitragyna Speciosa, also known as Kratom, was first discovered in Southeast Asia. Kratom is a tropical evergreen tree in the Rubiaceae family. Kratom owes it’s magical capabilities to compounds called Alkaloids, precisely two alkaloids we know as Mitragynine and 7-hydroxymitragynine (sometimes referred to as 7-OH). Any effects and benefits of Kratom are due to this pair of alkaloids.

It found its place as a traditional household wellness botanical, usually consumed in tonic-like teas that were bitter to the taste.

Little written history about the plant exists today, which leads researchers to believe that it was used only by the villagers and subsistence workers that made up Southeast Asia. It was probably not used by the upper classes or ruling elite. While the laboring men were chewing the bitter plant to get them through their rough days, the women were home steeping the leaves in their teas.

Hemp and Cannabis a History

Scientists are still trying to pinpoint when people began to take advantage of Hemp’s many properties. According to a Science Advances study, the Cannabis and Hemp plant evolved 28 million years ago on the eastern Tibetan Plateau. Archaeologists have discovered ritual Cannabis burning in Central Asian sites as far back as 5000 years ago.

Archaeologists have discovered Cannabis plants that people burned 2500 years ago, high in the Pamir Mountains in far western China. They’ve uncovered skeletons and wooden plates, bowls, and wooden braziers that held the burning material so that people could consume the smoke. This group of people belonged to Zoroastrianism, which celebrated the mind-expanding properties of Cannabis in sacred texts.

The first written history of Cannabis use in ancient Chinese medicine was recorded in the world’s oldest pharmacopeia, the pen-ts’ ao ching, in 2700 BC. Indications for the benefit of Cannabis included: rheumatic pain, intestinal constipation, disorders of the female reproductive system, malaria, and others. One surgeon in the pen-ts’ ao ching recorded that he often mixed the plant with rice wine to anesthetize patients during surgical occupations. Historically, this is the first recorded Cannabis tincture!

While the plants have existed for millions of years, they did not have the same potent qualities we enjoy today. The Cannabis plants which existed thousands of years ago had only trace amounts of the cannabinoids we enjoy today like THC, CBD, CBC, etc.

Over time, people began domesticating botanicals to enhance the contents they desired.

The Difference Between Tinctures, Tonics, and Infusions

While Tinctures, Tonics, and Infusions belong to the same family of herbal remedies, they have their distinctions.

Tinctures use raw plant material, such as Cannabis or Hemp plants, that you soak in solvents such as alcohol or glycerin. You generally want to soak the natural plant material for about 3-12 weeks, depending on what type of tincture you’re creating.

The solvent tends to act as an activator for Cannabis or Hemp CBD Tinctures, elevating the desired effects. If kept from extreme temperatures, Tinctures are also known to have a long shelf life. The alcohol or glycerin will preserve whatever plant matter’s involved.

Typically, Tinctures are ingested by the dropper-full under the tongue. You can also add tinctures to your foods and drinks.

Tonics are similar to teas but more potent. Tonics, also known as brews, are technically created when herbs and botanical plants boil in water for ten or more hours.

These brews are potent and hard to digest. So, adding vinegar, bone broth, wine, or honey to the mixture is recommended. I’d classify Kratom as a form of Tonic. A VERY mild tonic, at that.

Infusions are very similar to Tinctures. Instead of preserving the raw plant material with alcohol or glycerin, Infusions typically are submerged in a lipid such as oil or wax.

You can create Infusions with or without heat. Cold botanical Infusions use sunlight to extract the plant’s properties over one to four months. Hot infusions involve slow stove-top simmers at low temperatures.

Historically, natural botanicals have offered an endless source of relief to people. Plant-derived products have dominated human pharmacopeia for thousands of years, almost unchallenged. Even modern, synthetic medicines that we use today, like aspirin, are formulated partly from plant matter. There’s nothing witchy about its longstanding history. Botanical Tinctures, Tonics, and Infusions are as helpful today as they have been throughout history.