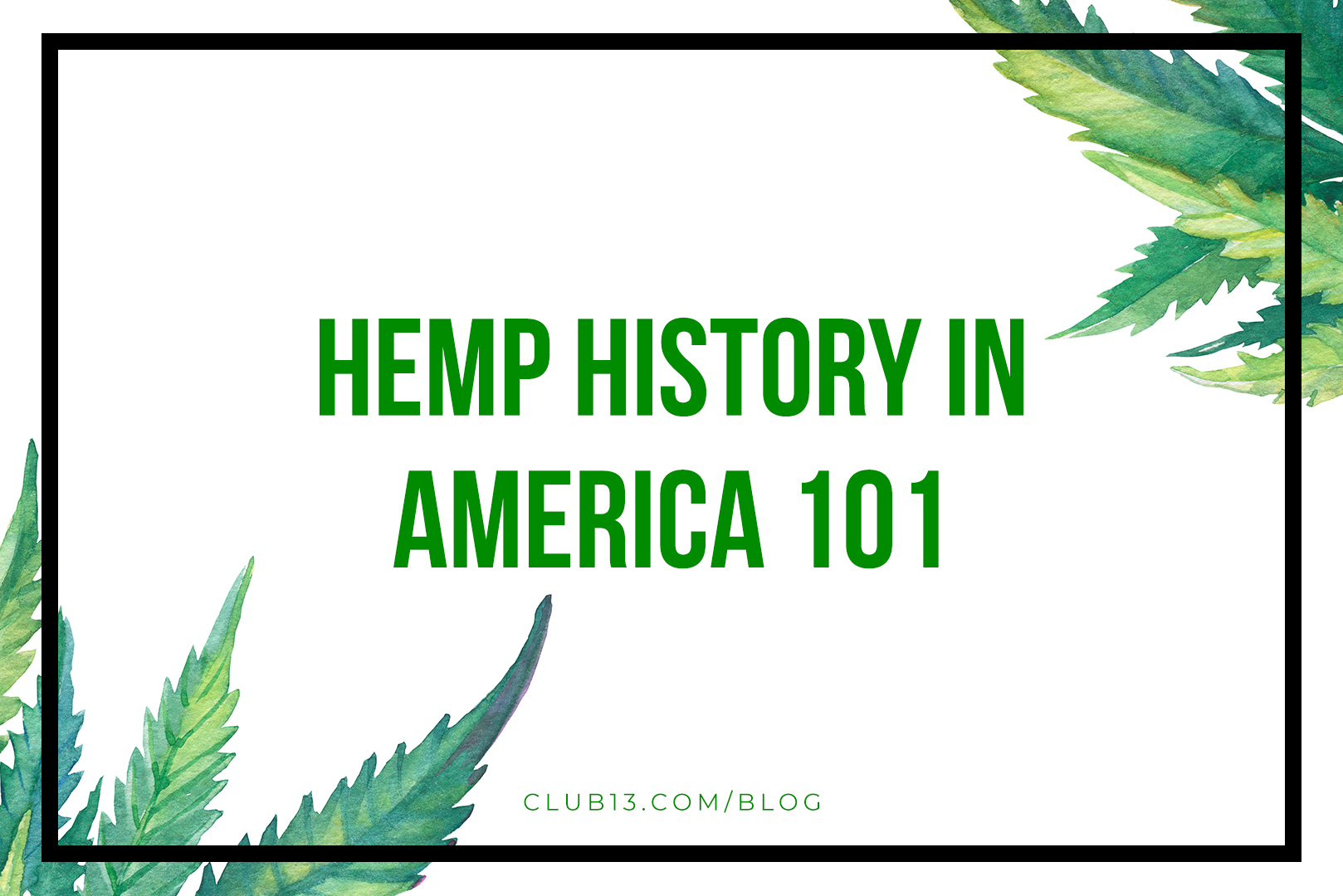 The ever-versatile hemp plant has been a staple crop all over the world. The hemp industry is among the oldest industries on the planet, with its roots tracing back more than 10,000 years. According to The Columbia History of the World, Hemp was probably the earliest plant to be cultivated for textile fiber. Columbia states that “the oldest relic of human industry is a bit of hemp fabric dating back to approximately 8,000 BC.”

Humble Beginnings in a New World

When the Puritans landed in Colonial America, so did Hemp. It was planted to supply materials such as lines, sails, and other things. At this point in history, all sea vessels carried some stock of hemp seed. As Hemp was the fiber of choice, it spread as fast as old world diseases in the newly founded colonies. Sometime in 1619, Jamestown announced the order for all farmers to grow Hemp to supply the colonies. As more settlements popped up, hemp cultivation laws became more mandatory.

Hemp is useful as a “cover crop,” which means it enhances soil health by shading out weeds and adding diversity to crop rotations. Other colonial crops, like tobacco and sugar, which have highly acidic pHs, wreaked havoc on plantations arable lands. Planting Hemp helped heal some of the damage caused by these crops.

It’s not surprising that our founding fathers became staunch supporters of the plant. President George Washington, Thomas Jefferson, and Benjamin Franklin not only spoke highly of the plant but were big players in the hemp industry.

One of the first-ever patents made in the United States was given to Thomas Jefferson for hemp threshing machines. This threshing machine was designed to remove a plant’s grain from its stalks and husks. Also, Thomas Jefferson, while serving as Ambassador to France, was known to have smuggled new strains of cannabis seed from China to France, then to America. Jefferson wrote about the advantages of Hemp over tobacco, “in use, labor and for the sake of the land.”

We all know the stories about Benjamin Franklin and his newspaper company, but did you know that his paper mill processed Hemp into parchment?  The Declaration of Independence, Thomas Paine’s Common Sense, the Federalist and Anti-Federalist Papers, the Articles of Confederation, and of course, the United States Constitution were all written on hemp paper.

“Reefer Madness” and the Fall of Industrial Hemp

Hemp was widely grown and used in America until 1937 when Congress passed the Marihuana Tax Act, subsequently lumping industrial Hemp in with it’s more infamous cousin – Marijuana. Thus, the era of Hemp prohibition in America began.  The tax and licensing regulations made hemp cultivation nearly impossible for the average American farmer. The chief promoter of the act was Harry Anslinger. Anslinger then went on to spearhead some of the first major anti-marijuana campaigns around the world.

World War II came soon after. After Pearl Harbor, foreign supplies of “manilla hemp” fiber from the Philippines were completely shut down. The USDA countered this problem by producing a film called “Hemp For Victory.” They hoped to encourage U.S. farmers to grow Hemp for the war effort. In addition to this, the U.S. government formed the War Hemp Industries Department and subsidized hemp cultivation. Once this happened, U.S. farmers began growing millions of acres of hemp plants across the Midwest.

After the war ended, the government quietly shut down all the hemp processing plants, and the industry faded away again.

Sometime in the 60s, the U.S. government began to acknowledge that industrial Hemp and marijuana were distinct varieties of the Cannabis plant. Then came the “War on Drugs.” As part of this War on Drugs, President Richard Nixon subsequently signed the Controlled Substances Act (CSA) of 1970. Under this act, hemp was considered a Schedule 1 Controlled Substance, which is the same category as cocaine and heroin. Cocaine, Heroin, and Hemp…only one of these has been the medium on which modern democracy’s finest manuscripts were written.

Forty-eight years later, America collectively recognized this discrepancy and as such, Hemp is now completely legal! In 2018, the Farm Bill was passed, legalizing hemp, but not quite curing decades of ill conceived stigma.

These days, our sails and ropes and other fibrous materials are generally made with artificial plastics and other weather-protecting materials. Still, there is a huge market for hemp rope, paper, and clothes. But, some of the most profitable products coming out of the modern hemp industry are CBD products. Legalizing Hemp was one of the greatest factors in birthing the new CBD movement that is sweeping the States. CBD is derived from the Hemp plant and is used in an assortment of ways, from pet anxiety drops to bath soaps.

So, while our founding fathers were using hemp to make paper and rope and most likely using cannabis to get “high,” modern hemp farmers and consumers have a different vision for the historical plant.

That vision is coming to life here at Pursuit of Wellness, your one-stop shop for all CBD needs.